Three Ways to Survive Creative Criticism (AKA it’s only a flesh wound).

When you’re creating something new the opportunity to receive people’s feedback is priceless but, also, potentially painful. If you show people your creative work, be it a business plan or an ebook, a painting or a petrie dish (it doesn’t matter as long as it’s your baby) then you’re asking for a beating (especially if it’s an ugly baby). You know it and I know it. The good news is criticism doesn’t have to hurt. Or at the very least, it can hurt a lot less. 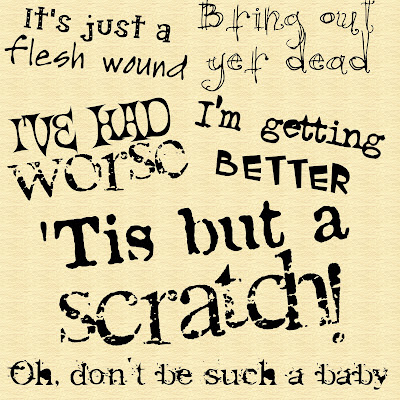 There are some proven techniques that I personally use to get the most value out of creative criticism… with the least amount of pain. And here’s how…

1/ First, acknowledge not all people are equal opportunity feedbackers.

This is the first thing you need to understand before you give your baby out to the cold, hard world of feedback and criticism. I’ve broken the sorts of people you’ll probably find into five distinct groups of people.

I know it’s hard to believe but some people just don’t like you. They might hide it well, but they might have an axe to grind, they might feel threatened by your potential success or they might just be in a shitty headspace right now. These negative Nelly’s will offer you seriously unconstructive feedback. You’ll only recognize them over time when the pattern of their feedback to you is always negative, negative, fear and negative. Once you’ve seen them for who they are, ditch ’em from your friend group, you don’t need that crap!

Some sweet, deluded souls want to encourage you with glowing feedback, deserved or not. They only believe in the carrot and not the stick, the tickle without the slap. These hippies are annoyingly nice and their ‘opinion’ isn’t useful. If you don’t receive an honest appraisal then you won’t be able to learn from it. I mean, really, how is a warm cuddle going to help you crack that million dollar business idea? Nope, what you need is cold, hard truth (the cuddle can come later).

Some people pretend to have looked at your work and make a few generic comments that are pointless. Or they’re so busy that they glanced at it, felt the need to pretend they understood it and again, with the generic comments. But they’re really good at covering their half-arsed attempt, so you’ll probably never know.

Some irritating people are natural meddlers and workaholics. They will jump on your request with gusto and by the next time you see them they will have gone through your ideas with a fine toothed comb. That seems great, right? Wrong! These annoying assholes will come back to you with a whole book of changes based on how they would do it. They’ve unwittingly thrown out the best of what makes you unique and they’ve now confused you and muddied your ideas. Now, as you may recall, I said this was your creation, not theirs. Recreating something with their stamp on it is not the point of the exercise at all.

Some people, wonderful human beings that they are, will actually give you what you want: their balanced opinion. They may not have spent the hours that the high achieving meddler did, but they were focussed. They considered their initial reaction to your project, they considered it from a few different angles, and they happily gave you constructive criticism. If you have someone like this in your inner circle, keep them! The problem with requesting feedback from a group of people is you rarely know who belongs to which category of feedbacker. So who do you listen to? All of them. Which criticisms do you take on board? All of it. ‘Well hang on,’ I hear you saying, ‘you promised me three ways to take the sting out of criticism and so far you’ve just said listen to everything and everyone. Not helpful!’ Au contraire, my impatient friend. I’m now going to share my  no-pain system for handling constructive criticism. Once you start using it you’ll realize it doesn’t even matter what type of person is giving you the feedback, and here’s why.

My first piece of advice here is to politely and actively listen to all of the information you’re receiving and write each point down on a list. OK, got that list? Go through the feedback you’ve received line by line. I want you to quickly put each piece of criticism into one of three categories:

If you’ve received some feedback and it rings true in your entrepreneurial heart, great. This feedback could improve your final product, so consider how it might change your creation and if it works find a way to incorporate the changes.

So here is the other kind of ‘true’. The kind that is factually correct, but it doesn’t mean it is right. An example of this might be that someone says your idea is going to alienate male, white baby boomers. That would be worrying if that is who your target audience is, but maybe being divisive was the point of your work. Maybe you don’t care about that segment at all, and maybe it’s an important part of your strategy because you feel by doing that you grow closer to the segment you actually want to communicate with. In which case, you can discard that bit of ‘true’ feedback and carry on to the next line on your list.

It’s not true, it might even be stupid or spiteful feedback. If so don’t waste time, throw it away. HOWEVER, before you do, just check in with your ego. Are you being open or are you being defensive? If your ego is driving this feedback and reflection process then your business is going to suffer for it; you’ve just wasted a golden opportunity to learn and improve. Give yourself a quick kick in the ass and let go of your issues. Ready? OK let’s keep going.

Could be True Criticism

Draw your eye over all the feedback you’ve question marked. These will be the ones that could be true but need a little more thought before you put it into the implement/discard box. A word of warning, if you’re an over-thinker like I am, this stage could be a minefield. Try not to get bogged down in the minutiae as you might start to second guess everything. Remember, good entrepreneurs consider all the angles but they also act swiftly. Here’s a trick to get through that ‘could be true’ list so you can make fast decisions.

a) Review your ‘could be true’ list and circle anything that keeps popping up. This is what you need to pay attention to, it’s your market research gold. You’re now tapping into the wisdom of crowds; a super intelligence that surpasses the average idiocy we experience on a daily basis (Don’t believe me? Check this book out).

b) You MUST listen to it all, but it doesn’t mean you should act yet. If more than a few people are saying the same thing then they’re probably right… on some level.  But you’ll need to consider a few options before you make changes. The thing I need to remind myself is that people are often unaware of the reasons they think a certain way, so they won’t always know why they’ve given you the feedback they have. This is important because sometimes they might say they don’t think ‘x’ will work, but the real problem is that they didn’t understand an earlier key point. So it could be that ‘x’ is perfectly workable. Acknowledge that you’ve failed to communicate adequately and improve your elevator pitch.

c) The feedback is consistent. If the advice comes in and it’s consistent, and after reviewing you realise they are 100% right (dammit) then you’ve got some work to do. Don’t feel bad about it, you’ve just been saved from making a potentially expensive mistake and now you have the opportunity to make something even better.

Pain-free criticism is as simple as following this trusty flowchart.

Don’t forget to check out my flowchart above, it’s just a matter of following the steps towards  non-painful criticism (but keep reading because there is one more important point you need to know).

3/ Remember you are not your creation.

I find it helps reduce the pain of negative feedback to remember you are not your creation. No one is judging you personally. Ultimately you are the only person you need to impress (ok and maybe your customers). But if you do have a strong, visceral reaction to any feedback, it’s OK. You’re human. Simply examine your feelings and consider why you’re reacting. Does it stir up bad childhood memories? Or a time when you felt unworthy? Sit with your feelings for a moment and then consciously choose to let the negative emotion go. Then return to the feedback with an open mind and decide what to do with it.

In summary… don’t sweat the small stuff and rock on!

If the feedback is mostly glowing and/or useful then you’ve hit a jackpot my friend. Congratulations now it’s time for the hard work to implement it all! But, if you find the feedback is forcing you to rethink everything then so be it. If it means you ultimately walk away from this big idea, don’t sweat it. If you had one big idea you can have another, if not today, then tomorrow. That is, afterall, the nature of a creative entrepreneur. So take heart and remember, we rule the world!

Melissa is a writer and content marketer who loves helping entrepreneurs refine their message and become more creative in the online space. She develops content strategies for growing businesses who want to become thought leaders in their industry. When not blogging for herself (or for clients) she can be found fronting a funk band or geeking out to the latest episode of Game of Thrones.